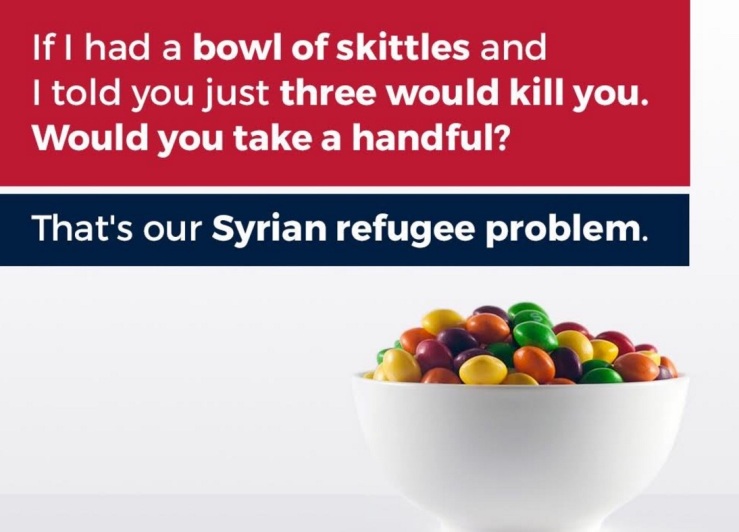 “If I had a bowl of Skittles, and I told you just three would kill you. Would you take a handful? That’s our Syrian refugee problem.”

There are various ways to criticize the argument it expresses, or implies. We can criticize it as an argument originating in National Socialist literature. We can criticize its eccentric use of a full stop in the middle of an interrogative second conditional. Or we can mock Donald Trump Junior for making 1980s Wall Street traders look like avuncular 1930s shopkeeps. All three criticisms attack the argument’s implied author’s intelligence or credibility.

But suppose we looked at the argument itself, rather than its origins or how it was formulated. After all, even Hitler had some true beliefs—that snow is white, say—and an argument is no less true for being ungrammatical, or even for being pitched by soulless corporate Brylcreem devotees (within reason, obviously).

A good place to start when thinking critically about arguments by analogy is how close the analogy is: how similar in relevant respects are the two things being compared? The answer in this case is: not very. Let’s list three relevant dissimilarities.

There are other criticisms here, too. There is the risk such cavalier propagandizing poses to stoking undue anti-immigrant sentiment or even violence, for instance.

There is also the often unquestioned assumption that among the Syrian refugee population there are inevitably bad actors. Perhaps that’s right (though perhaps it’s wrong). The relevant question as concerns assessing the various relevant probabilities, however, is whether there are proportionately more bad actors than in the pre-refugee US population, or whether the bad actors are sufficiently worse than their US counterparts. Perhaps there are and they are (though, again, perhaps not). Even so, within any reasonable parameters, the risk of harm from allowing Syrian refugees into the US will fall wildly short of that presented by the poisoned Skittle bowl. Indeed, it may, for all we know, be lower than if they are denied entry.

Since the Skittle bowl case is sufficiently unlike the case of the Syrian refugees in relevant respects, the argument by analogy fails.

One thought on “Syrian Refugees and a Bowl of Skittles”